Exploiting pre-2010 environment of fear, prosecutors intimidated Browns to unwittingly moot their own “legal standing” to fight for their freedom when they moved to another State. Indeed, polygamy (as an issue) was on its way to being heard by the Supreme Court of the United States (SCOTUS). Brown v. Buhman, the case of the “Sister Wives” reality-TV show, made it that far until January, 2017. The Tenth Circuit Court of Appeals in Denver Colorado had reversed the gains the case had won in District Court, by allowing a way for government to deny the right of Individual citizens to fight for freedom against any unconstitutional law. Whether or not one supports polygamy, when SCOTUS declined to hear this case because of the Tenth Circuit’s “decision,” the right of all US citizens to fight for freedom for any issue was effectively thwarted.

This is the second part of a series of posts pertaining to the tyranny of “Prosecutorial Discretion.” The same tyranny that protected Hillary Clinton from facing charges for proven crimes was also used to stop non-criminals’ fight for freedom in the “Sister Wives” polygamy case. If Part 1 of this series outraged you, this Part 2 (and beyond) will terrify you even more.

Few fellow law-abiding people in America have ever experienced the level of fear of their own government as experienced by Unrelated Consenting Adult Polygamists – UCAPs. For that reason, I must first write this post in this series to explain the context of how the political environment – created by the one-sided propaganda from manufactured-news media and academics – caused the real, immense, and rational fear in all normal polygamists prior to 2010. This is necessary in order to fully comprehend why, as their new reality-TV show began in the Fall of 2010, the Brown family in the Brown v. Buhman (“Sister Wives”) polygamy case were so fearfully threatened that they genuinely felt they had to move their family to another State.

When the modern polygamy rights movement for unrelated consenting adults began in 1994, there were no TV shows positive about polygamy. The only time that the media reported about “polygamy” was when it involved cults or criminals doing other actual crimes. This one-sided bigotry amounted to what could be called “hate speech” because it always incited people to wrongly think, say, and accuse that polygamy supposedly “always” means horrific criminality. Just saying the word, “polygamy,” to most people back then would cause instant angry reactions, albeit baseless.

At the turn of this new century, I was the only one who dared to be putting my neck up consistently and pro-actively pursuing the national media to inform the public about normal non-criminal polygamy. The focus of my work was (and still is) to educate the media to differentiate real criminals (from Tom Green at the start of that decade to Warren Jeffs at the end of it) as completely different from – and not having anything do with – normal Unrelated Consenting Adult Polygamy (UCAP).

By 2006, because of that work, HBO began the very first fictional TV show that did not show all polygamists as criminals, “Big Love.” Consequently, my work to differentiate UCAP polygamy in the media expanded.

Alas, the April 3, 2008, raid of Warren Jeff’s FLDS cult re-energized a real relapse back to biased, negative media. Through and with the (non-Mormon, Christian) TruthBearer.org organization, (religiously neutral) Polygamy Day ®, and (media-distribution source) Pro-Polygamy.com, I worked feverishly to keep educating the media for more accurate differentiation, even as much of the media would often still choose to be manufactured-news outlets for anti-polygamy propaganda – inciting the masses against normal non-criminal polygamous families, and terrifying those families with fear of hostility & violence.

I long exposed the concept of what is now being called #FakeNews for over a decade, long before President Trump’s 2016 campaign called it out. I simply called it, “manufactured-news outlets.” Such media do not actually report the news, they just get bits of information with which to manufacture into a product they “sell.”

Many of such media even went out of their way to intentionally invent and incite hostility against polygamy – even using imaginary stories by supposed “news journalists.” For example, John Quiñones Lies in “Unreality” on ABC-TV with a horrifying made-up story using paid actors and actresses on a would-be “reality” TV show!

Even so, the national UCAP polygamy movement continued, and I persisted to educate in the media where possible.

By the end of the 2000s decade, I had also been getting “circus act” requests from certain media for either my family or families in our organization to be in television shows. What they wanted, though, were things that raised alarm signals for our families. For our safety, I turned them down. When they went looking elsewhere, networks like TLC had a horrid history of manufacturing shows “about polygamy” to purposely make polygamy look bad. In those media-requests for “polygamous families,” they wanted families to be as nothing more than money-making “circus acts” for the networks. My turning down their “requests” were proven to be wise decisions more than once.

In a Special Report on December 2, 2010, sent out through Pro-Polygamy.com to the media, examples of TLC’s anti-polygamy history were reported:

But prior to that new reality TV show in 2010, TLC’s programming in previous years had been bigotedly harmful against normal consenting adult polygamists.

On September 24, 2006, TLC aired a would-be “documentary” called, “My Husband’s 3 Wives.” While claiming to be “about polygamy,” the show centered on an egomaniacal man’s “polygamy by affair.” The national polygamy rights movement for consenting adults took note of TLC airing such a horrendously false “re-definition” of polygamy about which the movement so adamantly opposed. … Clearly, this 2006 show was never a legitimate example for learning “about polygamy.”

Two years later, on November 16, 2008, TLC aired another show, “Forbidden Love: Polygamy.” While claiming to be “about polygamy,” this would-be “documentary” was simply one attractive, young British lady’s anti-polygamous viewpoints about Mormon polygamists. The national polygamy rights movement for consenting adults again took note of TLC airing such a twisted anti-polygamy show. … Clearly, this 2008 show was never a legitimate example for learning “about polygamy,” either.

By the Fall of 2010, perpetrating a perpetuating pile-on, even university academics started climbing aboard the anti-polygamy propaganda “train.” So I also went to work refuting such falsehoods for the academic community as well (e.g., Scholar’s Anti-Polygamy Report for Court is Discredited) and began the videorecording of a new public speaking series on polygamy (of ten speeches per “Season”) presented live before non-polygamous audiences.

It is with and in that context of propaganda, manufactured-news media, and academics by the start of this decade (the 2010s) that many, many UCAP (unrelated consenting adult polygamous) families were rightly scared to be public or to trust networks to report about them. No matter how good such normal polygamous families were, the political environment was just too terrifyingly bias-incited by the false anti-polygamy propaganda.

The Brown Family on “Sister Wives”

One family, though, having been busy living their lives over the years (i.e, not active in the national UCAP movement), and thereby less aware of TLC’s past abuse toward polygamous families, was lured to trust TLC for a new “reality TV series.” To the surprise of the skeptical National Polygamy Rights Movement for Consenting Adults, that Fall 2010, the network premiered the very first polygamy-positive realty-TV show. It was called, “Sister Wives.” Admittedly, the national UCAP movement was very happily surprised to see that TLC’s ‘Sister Wives’ put the ‘L’ back in ‘The Learning Channel’.

This new show, “Sister Wives,” was, quite-simply, a reality show about Mormon polygamist Kody Brown, his one legally married wife, Meri, his two other non-licensed wives, Janelle and Christine, plus an incoming non-licensed wife joining the family named Robyn, and all of their dozen and a half children. This was the first time that such a non-fiction TV series aired – and it treated the family in a positive light! Kody and these wives were all unrelated consenting adults, no coercion, no underage issues, and no crime. Finally, polygamy was not being aired in line with the fearmongering, hate-inciting, and false propaganda!

What happened next is succinctly described on Page 5 of the April 11, 2016, reversal of Brown v. Buhman by the U.S. Court of Appeals for the Tenth Circuit.

Viewers of the [Sister Wives] show contacted the Lehi Police Department to “inquir[e] what the department intended to do” about the Browns. … The day after the first episode aired, the Department publicly announced it was investigating the Browns for violations of the Statute. In October 2010, the Lehi Police Department forwarded the results of its investigation to the UCAO. Following standard practice, the UCAO opened a case file on the Browns. Fearful they would be criminally prosecuted, the Browns moved to Nevada in January 2011. Mr. Buhman was quoted in a January 2011 media report as saying that despite the Browns’ move, his office would not rule out the possibility of prosecution.

The TV show later aired episodes showing the very real fear the family faced. Seeing police cars sitting outside their home “watching” them, the Browns rationally felt compelled to move out of Utah to Nevada “in the middle of the night” in the terrifying fear for their family of the intimidating government.

It is that very intimidation that would be later exploited as one part of the government’s two-part tool to moot the case. The fact that the understandably intimidated Brown family actually moved out of the State of Utah would be later exploited to assert that they had no more “legal standing” to bring Brown v. Buhman to court, so that the Utah prosecutors could thereby still use the anti-polygamy statute to threaten any other polygamous families.

By understanding the context of this fear and intimidation as it existed at the start of the 2010 decade, readers will be able to more comprehensively perceive the ramifications of the even larger tyranny of “prosecutorial discretion” used to moot the otherwise valid “legal standing” of the Brown family to fight for their freedom from tyranny.

I will elucidate the further details of these issues in the upcoming post in this series. Of course, if anyone is still wondering how this connects to Hillary Clinton and “emailgate” in 2016, then they will still need to read the Part 1 in this series, “Prosecutorial Discretion,” Emailgate, and Polygamy – Part 1

With Part 1 understood, and now with this Part 2 understood too, the outrage should likely begin boiling. Can you imagine the fear of government “watching” you to the point you feel compelled to move out of state? Can you see how tyrannical it is to then have that fear-caused “out-of-State move” later used against you in actually then denying you the “legal standing” to fight for your freedom to get such an anti-Constitutional tyranny overturned? If these matters outrage you (and they certainly should), then you will likely find yourself even more outraged by the profound threat to Individual Liberty that the overall tyranny of “prosecutorial discretion” was applied in the “Sister Wives” polygamy case known as Brown v. Buhman. 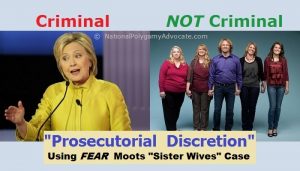