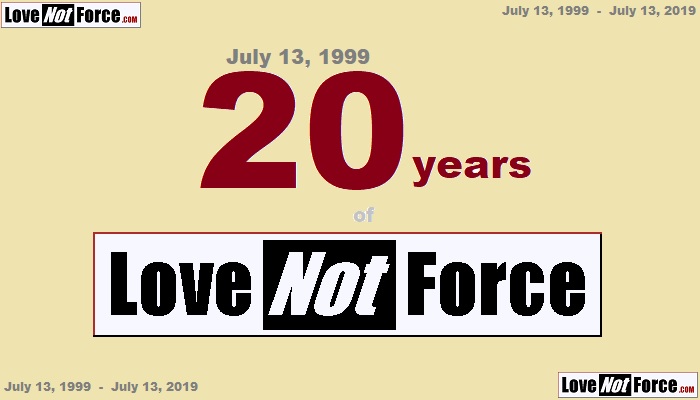 No, this is not just the opening lyric from the famous Beatles song, “Sgt. Pepper’s Lonely Hearts Club Band.”

Twenty years ago today, the standard of “Love-not-Force” was first set on July 13, 1999. What first started as a standard for Christian Polygamy grew beyond that over these past 2 decades – becoming something larger now, that even non-Christians and non-polygamists can embrace it too.

Love-not-force established that a husband must never force polygamy on a wife, that he must only love her so deeply that she, herself, chooses to embrace polygamy for the family by her own consent and genuine assent.

For Christians who believe in God and the Bible, the standard exhorted, “If you believe that God has promised you anything, including polygamy, then let God be God. From the Genesis story, let God bring your Isaac, don’t force your Ishmael.“ It brought a Biblically proof-texted full-stop-sign end to an emerging false doctrine that had come to be known as “force polygamy.” With Love-not-Force, a man in Christian Polygamy must only love his wife, not force polygamy on her – ever. A website, LoveNotForce.com, was begun so as to provide a public detailing of these principles for even the most “die-hard fundamentalist” Christians who felt compelled to still insist on force polygamy.

Thereby, as a standard for living, Love-not-Force first originated for the new and young sub-movement Christian Polygamy. A few years later, it had grown to become the standard for the larger overall movement of Unrelated Consenting Adult Polygamy (UCAP) of all forms. And since that second phase, it has subsequently even become a standard that everyone and anyone can embrace as a personal living standard.

To wit, as a way of life for anyone even beyond the issue of polygamy, Love-not-Force centers around three important insights for understanding – and loving – any of our fellow human beings:

Many readers might recognize that third line as being called “the Golden Rule.” Although the line comes from Christianity, it is such a powerful line that most people understand that one does not even have to “be” a Christian in order to choose it as a way of life.

In the same way, whether one is a Christian or not, and whether one supports polygamy or not,…

Love-not-Force can be a way of life for anyone.

This short speech from 8 years ago explains the history and why anyone would want to embrace this standard as a way of life: Love-not-Force.