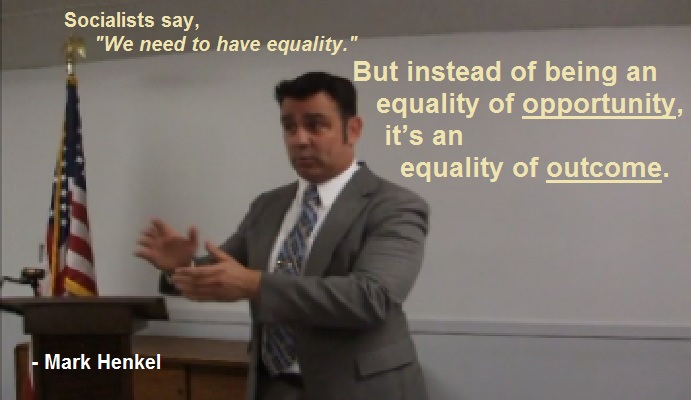 Socialists do not understand what real equality means.

To be clear, I wholly and emphatically believe in equality among humankind. But equality does not mean that there are no differences in the content of different people’s characters or no differences in the levels of their performances and/or achievements. As I am an Anti-Socialist, this distinction is important to understand.

“Socialists say, ‘We need to have equality.’ But instead of being an equality of opportunity, it’s an equality of outcome. “ I declare this soundbite in my speech, The Anti-Socialist.

In the speech, I present an example of what would happen if I played a one-on-one game of basketball with renowned basketball legend, Michael Jordan. Beyond any doubt, in such a game, that superstar would metaphorically “wipe the floor with me.” I would clearly end up losing the game with the final score being something like 500-0.

But the truth is indisputable. When it comes to basketball, I am most definitely NOT an “equal” with Michael Jordan. While he and I both had equal opportunity to become great at basketball, the fact remains that he chose to do that and achieved it. And I did not. We both have equality of opportunity, but not equality of outcome.

While my speech does not directly address anything about UCAP (unrelated consenting adult polygamy), understanding the point of this meme sound-bite does apply nevertheless. Using big government to force OMOW (one man one woman) doctrine is what I call marital socialism. Instead of providing an equality of opportunity for marriage, it seeks to forcefully impose an equality of outcome. With a line that would make Karl Marx proud, it declares, “One for Each so that Each Might have One!”

As part of the larger project to empower polygamy activists with tools of shareable memes, the pic for this sound-bite has been posted on Pinterest.

These three links (one to Youtube and two to Pinterest) are created to be tools for supporters to use when working to persuade others to allow freedom for polygamists. 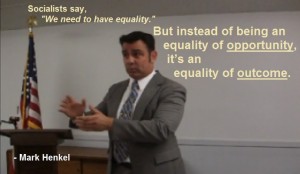